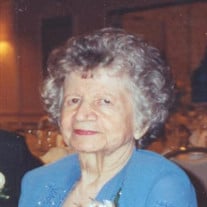 ELEANOR L. GLISTA 1927 � 2009 CHICOPEE � Mrs. Eleanor L. (Gutowski) Glista, 81, passed away in a local nursing home on Monday, February 23, 2009. She was born in Holyoke on July 5, 1927, a daughter of the late Joseph and Natalie (Kaszprynska) Gutowski. She attended local schools and was a graduate of the former Holyoke Business School, and previously employed at Holyoke Hospital. She was a communicant of St. Anthony of Padua Church. She was the wife of the late Ferdinand Glista who died in 2001. She enjoyed playing her piano, knitting, and watching the Red Sox. The pride and joy in her life were her children and grandchildren. She is survived by her son, David and his wife Kelley of Easthampton, and her brother, Edward Gutowski of Agawam. She will be sadly missed by four grandchildren, Jason, Craig, Heather, and Sara, and two great grandchildren, Cooper and Lily. She was predeceased by her beloved daughter, Carol A. C�Miel on December 11, 2005, her brother, Joseph Gutowski, and her sister Cecelia Rusin. Funeral services are Wednesday, February 25 at 8:30am from the Brunelle Funeral Home, 811 Chicopee St., followed by a Liturgy of Christian Burial at 10am. A calling hour will precede the funeral from 8:30 to 9:30am. Burial will follow in Mater Dolorosa Cemetery in South Hadley. In lieu of flowers, contributions in Eleanor�s memory may be directed to the American Red Cross. Brunelle Funeral Home 532-7711

The family of Eleanor L. Glista created this Life Tributes page to make it easy to share your memories.

Send flowers to the Glista family.