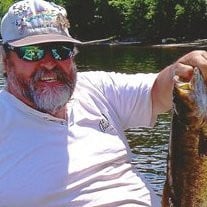 CHICOPEE- Edwin �Chico� Rivera, 59 passed Thursday, October 3, 2013 at Mercy Medical Center. He was owner and proprietor of Chico�s Siding & Exterior Designs in Chicopee for over 30 years. He was born in Caguas, Puerto Rico on January 29, 1954, son of the late Angel L. Rivera and survived by mother, Guadin G. Rivera of East Longmeadow, MA. Chico was an avid fisherman and bird hunter spending the majority of his free time out on the water or in the fields with his dogs. Playing softball was his passion in his earlier years. He was a member of the Pioneer Valley Anglers Association, Chicopee Tigers A.C. and a graduate of Chicopee Comprehensive High School. He is survived by his beloved wife of 25 years, Linda (Plasse) Rivera of Chicopee; his daughter, Alexandria M. Rivera of Chicopee; his mother, Guadin G. Rivera of E. Longmeadow; his brother, Angel L. Rivera, Jr of Puerto Rico; his sister, Carmen �Kitty� Taylor of Springfield; his mother in law, Liette Plasse of Chicopee; two sister in laws, Carol Pittsinger of Chicopee and Sue Anderson of South Hadley. He also leaves behind several nieces and nephews, dear friends and his buddies, Cassie and Molly. Visiting hours will be held on Tuesday, October 8, 2013 from 4-7 PM at Brunelle Funeral Home, 811 Chicopee St., Chicopee, MA 01013. His funeral will begin on Wednesday at 8:45AM from the funeral home and be followed by a Liturgy of Christian Burial at 10AM in St. Rose de Lima Church, 600 Grattan St., Chicopee. A private inurnment will be held at a later date. If friends desire, memorial donations in Chico�s name can be made to the Tigers A.C. Youth Program, 14 Montgomery St., Chicopee, MA 01020 or to St. Joan of Arc School, 587 Grattan St., Chicopee, MA 01020. Please visit www.brunellefuneralhome.com for more details. You are using an outdated web browser that does not support this video. Your browser does not support this video format. You should be able to view it in Chrome, Safari or Internet Explorer. $(document).ready(function(){ if ( false === supports_h264_baseline_video() ) { $("#vdfmtnt").show(); $("#vidplyr1").hide(); } });

The family of Edwin O. Rivera created this Life Tributes page to make it easy to share your memories.

Send flowers to the Rivera family.