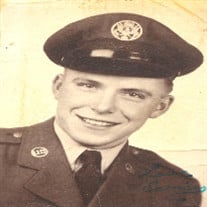 EARNEST J. KRATZER, SR 1935 � 2008 CHICOPEE � Earnest J. �Earnie� Kratzer, Sr., 73 of Chicopee died peacefully on Thursday, July 3, 2008. He was born in Walnutport, PA on June 3, 1935, the son of the late Charles and Cecelia (Soupy) Kratzer. He attended schools in Pennsylvania and proudly served in the U. S. Air Force retiring after twenty two years of honorable service. While in the military, Earnie and his family traveled and lived in places such as Texas, Ohio, New York, and Belgium, until he was stationed in Vietnam in 1969 � 1970. He returned to the United States and reunited with his wife and family at Westover Air Force Base, stationed there until his retirement in 1974. Thereafter, he was employed by the former Two Guys Department Store and the bulk mail center in Springfield. He was an accomplished mechanic and one of his hobbies included restoring Ford Model A�s. He also enjoyed gardening, growing flowers and vegetables in his backyard. One of his favorite hobbies was the collection of stuffed animals from toy crane machines. His collection included hundreds of stuffed animals which were donated to local charities. He is survived by his beloved wife of fifty four years, Margaret (Fogel) Kratzer, they were married on June 11, 1954, five children; daughters Bonny Knight and her husband Wilburt of Scottsdale, AZ, Suzanne Labonte and her husband Gerry of Chicopee, Cheryl Doming and her husband Rene of Northampton, and Rebecca Lavelle of Chicopee, and his son, Earnest Kratzer, Jr. and his wife Laurie of Chicopee. He will be sadly missed by fifteen grandchildren, Jeffrey, Steven, Jill, Greg, Justin, Will, Jay, Alex, Amanda, Shelley, Samantha, Madeline, Dakota, Alex, and Troy, and two great grandchildren, Morgan and Cooper and many nieces and nephews. He also leaves four sisters, Tina, Anna, Teresa, and Julie. He was predeceased by four brothers, Charlie, Billy, Eddie, and Stephen and three sisters, Mary, Wilma, and Agnes. The funeral procession will form on Wednesday, July 9 at 9am at the Brunelle Funeral Home, 811 Chicopee St., in the Willimansett section of Chicopee, followed by a funeral home service at 10am. Burial will be in St. Rose Cemetery, Granby Road, in South Hadley. Calling hours at the funeral home are Tuesday, July 8 from 4 � 7pm. The Kratzer family would like to express their appreciation for the professional care given to Earnest by the staff of Birch Manor Nursing Home and respectfully request in lieu of flowers, memorial contributions be directed to Birch Manor Rehabilitation & Skilled Nursing Center Activities Fund, 44 New Lombard Rd., Chicopee, MA 01020.

The family of Earnest J. Kratzer, Sr. created this Life Tributes page to make it easy to share your memories.

Send flowers to the Kratzer, family.