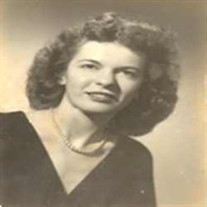 Dorothy Mainville O�Malley was born on March 19th 1925, in Holyoke to Lionel and Catherine Mainville. She passed away peacefully in her sleep during the morning of Monday January 19 2009. Dorothy graduated from Chicopee High School and, during World War II, went on to work at F.W Sickles Co. where her �can do� attitude attracted many friends and produced many fond memories. Dorothy, known as �Dot� to friends and family, later met and married Patrick John O�Malley. She spent the next part of her life raising her two children, Karen and Patrick. Ahead of her time, Dorothy brought her industrious nature and dedication to Falls Machine & Screw Co where she was a leader and officer for over 35 years � a true pioneer for women leaders in the workforce. Dorothy possessed a fine appreciation for detail and paid great attention to it in her dress, academics, professional work and hobbies � such as knitting. Several of her creations have adorned the homes of her family for many years. The �Courier and Ives� winter scene and Winnie the Pooh portrait are two favorites that have been treasured by 3 generations. Some of her works actually received awards at Sturbridge Village. Other treasures include meticulously maintained notebooks from her school years where science and math notes and diagrams have been copiously captured with exacting detail and penmanship. Many will remember Dorothy for her dry sense of humor and incredibly quick wit. She loved exercising her wit with those that could appreciate it, and when she did, there were often long periods of deep laughter. She maintained this part of personality through her later years. Dorothy�s favorite pastime was simply being at home and in the presence of family. Christmas Eve gatherings she organized became a tradition and created so many happy times when family from near and far would all be under the same roof. She always looked for opportunities to have her children and grandchildren together in one spot. Summers at Hampton Beach, NH became a favorite destination and created so many good times and memorable adventures � the kind that can only occur when the family is all together. Dorothy is preceded in death by her husband Patrick John O�Malley and her brother Howard Mainville. She leaves behind her daughter Karen O�Malley Taylor and her husband David Taylor of Charlotte, NC, her son Patrick John O�Malley Jr and his wife Sue O�Malley of Chicopee, two sister-in-laws: Lucille Mainville and Eileen McMahon, five grandchildren: Jason O�Malley, Ryan O�Malley and Steven O�Malley of Holyoke, Marc Taylor of Greenville, SC and Eric Taylor of Seattle, WA. She also leaves six great grandchildren and many nieces and nephews as well as her cherished pet cat, �Muggsy�. Private services for immediate family are being held at Brunelle Funeral Home in Chicopee, MA on Wednesday January 21, 2009. She will be buried at St. Jerome�s Cemetery in Holyoke, MA. The family would like to thank the many doctors and nurses that provided care to Dorothy over the years, especially Dr. Kevin Snow and his staff. The family would like to request any memorial donations be made to the American Diabetes Association. Please send to American Diabetes Association PO Box 11454 Alexandria, VA 22312. Please make all checks payable to: American Diabetes Association. In her final months Dorothy reflected that she �lived life the way she wanted to live it.� Let us all be so courageous and blessed to direct our lives which such grace, compassion and love. Rest assured, Dot, there will always be a candle lit for you.

Dorothy Mainville O&#65533;Malley was born on March 19th 1925, in Holyoke to Lionel and Catherine Mainville. She passed away peacefully in her sleep during the morning of Monday January 19 2009. Dorothy graduated from Chicopee High School and,... View Obituary & Service Information

The family of Dorothy O'Malley created this Life Tributes page to make it easy to share your memories.

Send flowers to the O'Malley family.