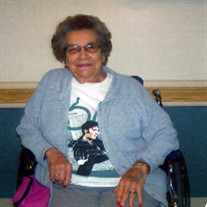 Dorothy C. Dolat 1924 � 2009 AGAWAM � Dorothy C. (Crevier) Dolat, 84, died Friday, September 25, 2009 at the Heritage Hall West Nursing Home in Agawam. She was born in Chicopee on December 18, 1924 to the late William and Pearl (Blue) Crevier. Dorothy lived all of her life in Chicopee, attending schools in Chicopee and was a longtime parishioner of St. Anne�s Church in Fairview. Mrs. Dolat started working at the former National Blank Book in Holyoke in 1965, where she gave twenty-three years of service before retiring in 1988 from Dennison National. She was also a member of National Blank Book�s Club 15. Dorothy was predeceased by her loving husband, Victor J. Dolat Sr. on September 6, 1999 after fifty-four years of marriage. She leaves to cherish her memory her daughter, Judith Messier and her husband Ronald of Springfield; her daughter-in-law, Rosemary Dolat of Granby; her sister, Charlotte Bugli and her husband Richard of Chicopee; her four grandchildren; her six great-grandchildren and several nieces and nephews. Beside her parents and her husband, Dorothy was also predeceased by her son, Victor J. Dolat Jr. on July 28, 2009. A funeral procession will form on Tuesday, September 29 at 8:45 a.m. at the Brunelle Funeral Home, 811 Chicopee St, Chicopee. There will be a Liturgy of Christian Burial at 10:00 a.m. at St. Anne�s Church in Chicopee. Burial will follow the Liturgy in Mater Dolorosa Cemetery in South Hadley. The calling hours will be Monday, September 28 from 4:00 p.m. to 7:00 p.m. at the funeral home. Memorial contributions may be made, in Dorothy�s memory, to the Baystate VNA and Hospice, 50 Maple St, P.O. Box 9058, Springfield, MA, 01102-9058.

The family of Dorothy C. Dolat created this Life Tributes page to make it easy to share your memories.

Send flowers to the Dolat family.