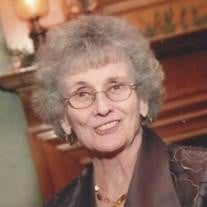 WEST SPRINGFIELD- Doris F. (Mainville) Paul, 87, passed away on June 5, 2015 at Landmark Monastery. She was born on February 29, 1928, a daughter of the late William and Anna (Corriveau) Mainville. Doris grew up in Holyoke and attended Holyoke Schools. After her marriage to J. Robert Paul, she lived in Springfield for many years before moving to Chicopee. She spent her last years at Monastery Assisted Living in West Springfield. Doris worked at A&P Bakery and Super Brush for many years. She enjoyed cooking and baking, playing BINGO, and singing in the choir at St. Mary. Doris always had a smile on her face and would stop to talk to everyone. She loved spending time with her family. Doris� family would like to extend a special thank you for the staff at Monastery Assisted Living for taking such good care of her. She is predeceased by her husband of almost 40 years, J. Robert Paul; three brothers; and five sisters. Doris is survived by her seven children, Robert and his wife Gail Paul, Terese and her husband Donald Wandrei, Leonard and his wife Carolyn Paul, Michael and his wife Jean Paul, Mark Paul, Mary Ellen and her husband Greg Aistrop, and Donald and his wife Pamela Paul; nine grandchildren, Sean Wandrei, Tracy Brown, Jessica, Todd and Justin Paul, Tina Marie Ocampo, Melissa Muna, Shaina and Erica Mansur; and eight great-grandchildren. She is also survived by a brother, Roger Mainville; two sisters-in-law, Lucille and David Buckel, and Gay Paul; and several nieces and nephews. Calling hours will be held on Thursday, June 11, 2015 from 5-8PM in Brunelle Funeral Home, 811 Chicopee St, Chicopee. A funeral home service will be on Friday, June 12, 2015 at 10AM, followed by burial in Notre Dame Cemetery in South Hadley. In lieu of flowers, donations may be made to Landmark at Monastery Heights, Activity Fund, 110 Monastery Ave, West Springfield, MA 01089. For additional information, please visit www.brunellefuneralhome.com.

WEST SPRINGFIELD- Doris F. (Mainville) Paul, 87, passed away on June 5, 2015 at Landmark Monastery. She was born on February 29, 1928, a daughter of the late William and Anna (Corriveau) Mainville. Doris grew up in Holyoke and attended Holyoke... View Obituary & Service Information

The family of Doris Florence Paul created this Life Tributes page to make it easy to share your memories.

Send flowers to the Paul family.