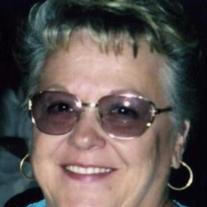 CHICOPEE � Dolores A. �Meme� (Boisjolie) Tessier, 70, died Thursday, April 21, 2011 at Wingate of South Hadley. She was born in Holyoke on February 12, 1941 to the late Leo and Rita (Dion) Boisjolie. Meme attended schools in Holyoke and graduated from Holyoke High School. She was a homemaker and took pride in raising her three wonderful sons. Meme was a longtime parishioner of the former Nativity of the Blessed Virgin Mary Church in Chicopee. In her free time, Meme enjoyed reading, traveling and Bingo. Her grandchildren were her pride and joy. Meme was predeceased by her husband, Ronald F. Tessier on April 6, 2003 after forty four years of marriage. She will be sadly missed by her three loving sons, Michael A. Tessier and his wife Melinda of Vernon, VT, Daniel R. Tessier and his fianc� Sharon Chouinard of Chicopee and Steven K. Tessier, Sr. and his wife Kerri of Las Vegas, NV; her three brothers, Leonard Boisjolie of Chicopee, Roland Boisjolie of Marietta, GA and Dennis Boisjolie of Westfield; her sister, Janet Archambeault of Chicopee; her seven beloved grandchildren, Amanda and Joseph, Jacob and Rebecca, Kayla, Steven Jr and Joshua. A funeral procession will form on Wednesday, April 27 at 7:45 a.m. at the Brunelle Funeral Home, 811 Chicopee St. Chicopee. There will be a Liturgy of Christian Burial at 9:00 a.m. at St. Anthony of Padua Church in Chicopee. Burial will follow the Liturgy in the Massachusetts Veterans� Memorial Cemetery in Agawam. A gathering to celebrate Meme�s life will take place on Tuesday, April 26 from 5:00 p.m. to 8:00 p.m. at the funeral home. Memorial contributions may be made in Meme�s memory, to the American Cancer Society, Centralized Memorial Processing Center, 30 Speen St. Framingham, MA 01701. Please visit www.brunellefuneralhome.com for directions or to share a story with Meme�s family.

The family of Dolores A. Tessier created this Life Tributes page to make it easy to share your memories.

Send flowers to the Tessier family.