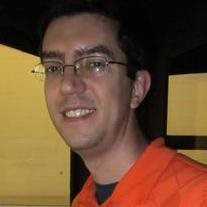 AGAWAM- David Lee Guimond, 34, died suddenly at his home on Tuesday December 27, 2011. He was born on December 28, 1976 in Holyoke to his mother and best friend, Cheryl A. Guimond of Chicopee. David was educated at Chapin School and Bellamy School in Chicopee and later graduated from Chicopee Comp in 1994. Furthering his education in electrical robotics David graduated from STCC in 1997. He then attended Beaver College now Arcadia University where he graduated with his B.A. in cognitive science/artificial intelligence. Most recently he was a proud graduate from Westfield State University with his M.A. in Psychology. David had just completed his internship with West Central Family and Counseling in May and had begun working there as a full time counselor. He was a member of the American Counseling Association and enjoyed animation, collecting Care Bears, listening and being aired on the Howie Carr Show and being a great son. David had previously run the Bridal Department at Macy�s in Holyoke and Springfield for over 10 years where he dedicated himself to event planning. In addition to his mother Cheryl who raised him, David will be missed dearly by his beloved Tanya Richards of Agawam who gave him �color�, smiles and love and his great aunt, Charlotte Manegre of Hampden. David is also survived by several uncles, aunts and cousins, friends, colleagues as well as his �Oopsy Bear�. A gathering of friends and family will be held on Saturday, December 31, 2011 from 1-4 PM at Brunelle Funeral Home, 811 Chicopee St., Chicopee, MA 01013 with a celebration ceremony at 3:30PM. �You were the shining star in our lives even though you entered our lives at different times. The joy and love you brought to each of us in your own special way was enormous and will never be forgotten. You will be thought of each day with love, thoughtfulness and caring just as you have made us feel in our lives.� In lieu of flowers, memorial donations in David�s name can be made to the Dakin Pioneer Valley Humane Society, PO Box 6307, Springfield, MA 01101. Please visit www.brunellefuneralhome.com to share condolences, pictures, stories, receive directions and view David�s personal webpage and Life Tribute video.

AGAWAM- David Lee Guimond, 34, died suddenly at his home on Tuesday December 27, 2011. He was born on December 28, 1976 in Holyoke to his mother and best friend, Cheryl A. Guimond of Chicopee. David was educated at Chapin School and Bellamy... View Obituary & Service Information

The family of David Lee Guimond created this Life Tributes page to make it easy to share your memories.

Send flowers to the Guimond family.