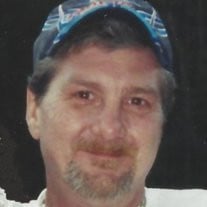 CHICOPEE- Charles Louis Berard, 58, passed away December 28, 2013 at Baystate Medical Center. He was born in Springfield on October 11, 1955 a son of Charles L. Berard, Sr of Belchertown and the late Wanda (Ochenkowski).Charles was educated and raised in Springfield where he resided for most of his life. He worked for several years as a laborer in the concrete construction industry and had resided in Chicopee. In addition to his father he is survived by his devoted companion, Crucita Rodriguez and her children, Jessie Torres and her husband Victor and Madeline Torres as well as Haleigh, Chastady, Natasha and Mackensie; his 3 sisters, Donna Calkins and her husband John of Ludlow; Suzanne Cassamasse and her husband Michael of Springfield; Barbara Reigotti of Glassboro, NJ and his sister in law, Pam Peters of Palm Bay, FL. He was predeceased by his brother Edward Peters. He will be missed by his nieces, nephews, cousins and extended family and friends. Visiting hours will be held Saturday January 4, 2014 from 1-3PM at Brunelle Funeral Home, 811 Chicopee St., Chicopee, MA 01013 with a funeral home service at 2:30PM. In lieu of flowers, memorial donations in Charles�s name may be made to Baystate VNA and Hospice, c/o Baystate Health Foundation, 280 Chestnut St., Spfld, MA 01199. Please visit www.brunellefuneralhome.com for more details. You are using an outdated web browser that does not support this video. Your browser does not support this video format. You should be able to view it in Chrome, Safari or Internet Explorer. $(document).ready(function(){ if ( false === supports_h264_baseline_video() ) { $("#vdfmtnt").show(); $("#vidplyr1").hide(); } });

CHICOPEE- Charles Louis Berard, 58, passed away December 28, 2013 at Baystate Medical Center. He was born in Springfield on October 11, 1955 a son of Charles L. Berard, Sr of Belchertown and the late Wanda (Ochenkowski).Charles was educated... View Obituary & Service Information

The family of Charles Louis Berard created this Life Tributes page to make it easy to share your memories.

Send flowers to the Berard family.