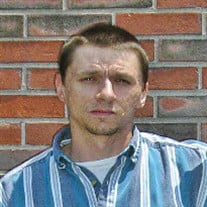 Bruce D. King, Jr. 1976 � 2010 Granby � Bruce D. �Junior� King, Jr., 34, died at home suddenly on Wednesday, March 10, 2010. He was born in Holyoke on January 3, 1976, the son of Patricia (Roberts) Smith of Granby and the late Bruce King, Sr. He attended local schools and was previously employed as a cook at Mount Holyoke College and the Adelphia Restaurant in South Hadley. Bruce enjoyed cooking, fishing, music, and being at peace with nature. He also spent time playing games with his brother. In addition to his mother, he is survived by his stepfather David Smith, and one brother, William Smith of Granby. He will also be missed by two aunts, Florence Thieme and her husband Roger, and Opal Dominguez and her husband Christopher; six uncles, Roy Roberts, David Roberts, Harold King, Joseph King, Garry King and his wife Marlene, Peter King, and several special cousins. Calling hours at the Brunelle Funeral Home, 811 Chicopee St. in the Willimansett section of Chicopee are on Wednesday, March 17 from 4 to 8pm. A Service of Remembrance will take place at 6pm. Burial will be at the convenience of the family.

The family of Bruce D. King Jr. created this Life Tributes page to make it easy to share your memories.

Send flowers to the King family.