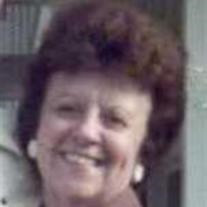 CHICOPEE � Blanche A. (Nadeau) Maes, 90, died Saturday, July 16, 2011 at Wingate at South Hadley. She was born in Chicopee on September 21, 1920 to the late John and Amelia (Harel) Nadeau. Blanche attended schools in both Holyoke and Chicopee. She graduated from Holyoke High School in 1940. In her early years, she worked for the former Grant�s Department Store for ten years. She was a parishioner of the former Nativity BVM Church in Chicopee. She spent much of her life as a Homemaker and in her spare time she truly enjoyed to read. She also had a passion for painting and ceramics. Blanche was predeceased by her husband, August �Gus� Maes just a short time ago, on March 6, 2011, after sixty-eight years of marriage. She leaves on this earth, to cherish her memory, her two daughters, Gail S. Ostrowski and her husband, Robert of Chicopee and Kathleen A. Brunetti and her husband, Dino of Chicopee; her seven grandchildren, Deborah, Sharon, Michael and his wife Dorothy, Matthew, Dina, Nicki, and Gino and her six great grandchildren, Jameson, Joey, Lila, Kian, Kina and Jack. In addition to her parents and her husband, she was also predeceased by her canine friend, Jingles and her feline friend, Moosie. There will be a Liturgy of Christian Burial on Wednesday, July 20 at 11:00 a.m. at St. Rose de Lima Church in Chicopee. Burial will follow the Liturgy in St. Rose de Lima Cemetery in Chicopee. A calling hour will precede the Liturgy from 9:00 a.m. to 10:00 a.m. at the Brunelle Funeral Home 811 Chicopee St. Chicopee. In lieu of flowers, memorial contributions may be made in Blanche�s memory, to either The Friends of the Chicopee Public Library, Emily L. Partyka Central Branch, 449 Front St. Chicopee, MA 01013-3106 or to the Make-A-Wish Foundation of Western and Central Massachusetts, Inc. 1 Armory Square, Springfield, MA 01105. Please visit www.brunellefuneralhome.com for directions or to share a story with Blanche�s family.

CHICOPEE &#65533; Blanche A. (Nadeau) Maes, 90, died Saturday, July 16, 2011 at Wingate at South Hadley. She was born in Chicopee on September 21, 1920 to the late John and Amelia (Harel) Nadeau. Blanche attended schools in both Holyoke and... View Obituary & Service Information

The family of Blanche A. Maes created this Life Tributes page to make it easy to share your memories.

Send flowers to the Maes family.