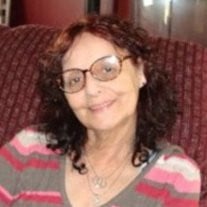 CHICOPEE- Barbara Ann (Wisniewski) Stepno, 68, passed away on Tuesday January 29, 2013 at Holyoke Medical Center. She has now joined her beloved husband Lester in eternal peace where they can once again watch over their family together. Born in Holyoke on July 23, 1944 to the late Stephen and Josephine (Baran) Wisniewski, she was raised in South Hadley and graduated from South Hadley High School in 1962. On August 9, 1962 she married the love of her life, Lester Stepno and they were blessed with just over 40 years of marriage together. They later moved to the Aldenville section of Chicopee where they raised their family and resided for the remainder of their lives. Barbara was primarily a homemaker and enjoyed reading, crossword puzzles, crocheting blankets for her grandchildren, playing cards and boards games especially Scrabble. She taught these games to her children and grandchildren at a young age, however, her greatest passion and gift was caring for her adored family. To have known her was to have been truly touched by an angel. Her compassion, kindness and love knew no bounds. To cherish her memory, she leaves her 5 grateful, blessed and heartbroken children; Tina Stepno; Tracy Senecal and her husband Stephen; Tammy Stepno all of Chicopee; Tara Stepno and fianc� Kevin Cobb of Enfield, CT; Tony Stepno and his wife Alicia of Chicopee; 5 adoring grandchildren, Brianna and Samuel Senecal, Anthony, Mason and Hailey Stepno and her special godson Michael Micheli all of Chicopee. She will also be deeply missed by her two brothers, Richard Wisniewski of Chicopee and Felix Wisniewski of FL. She also leaves her dear brother in law, William Davis II of NH; her nephews, Billy and Stevie Davis of NH; Mark Wisniewski of FL; her nieces, Terri-Ann, Wendy and Jodi Davis of NH; Chrissy Wisniewski of FL along with several aunts, an uncle and numerous cousins and dear friends. In addition to her parents and her husband, Barbara was predeceased by her brother, a dear sister and a nephew: Stephen Wisniewski, Theresa Davis and Peter Wisniewski. Visiting hours will be held on Monday, February 4, 2013 from 4-7 PM at Brunelle Funeral Home, 811 Chicopee St., Chicopee, MA 01013. Her funeral will begin on Tuesday, February 5, 2013 at 9:45 AM from the funeral home and followed by a Liturgy of Christian Burial at 11AM in St. Anthony of Padua Church, 56 St. Anthony St., Chicopee, MA 01013. The Rite of Committal and Burial will be in St. Stanislaus Cemetery, Montgomery St., Chicopee. If friends desire, memorial donations in Barbara�s name can be made to the American Cancer Society, 30 Speen St., Framingham, MA 01701. Please visit www.brunellefuneralhome.com for more details.

CHICOPEE- Barbara Ann (Wisniewski) Stepno, 68, passed away on Tuesday January 29, 2013 at Holyoke Medical Center. She has now joined her beloved husband Lester in eternal peace where they can once again watch over their family together. Born... View Obituary & Service Information

The family of Barbara A Stepno created this Life Tributes page to make it easy to share your memories.

Send flowers to the Stepno family.