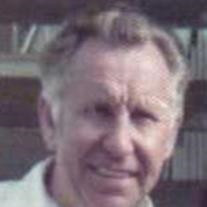 August J. Maes 1920 � 2011 CHICOPEE � August J. �Gus� Maes, 90, died Sunday, March 6, 2011 at the Holyoke Medical Center. He was born in Holyoke on June 12, 1920 to the late Francis and Victorine (Verheyn) Maes. Gus attended local schools and was a former parishioner of the Nativity of the Blessed Virgin Mary Church in Chicopee. Gus served our country during WWII in the United States Army where he attained the rank of Sergeant. While in the military, Gus earned the WWII Victory Medal, the American Campaign Medal and the Good Conduct Medal. Upon his discharge from the military, Gus made his home in Chicopee where he worked for the former Uniroyal for thirty-nine years. He was a member of the Teamsters Local 404 and a member of the Horsemans Association. In his spare time, Gus owned, trained and raced thoroughbred horses for over forty years. Gus leaves to cherish his memory, his wife of sixty-eight years, Blanche (Nadeau) of Chicopee; his two daughters, Gail S. Ostrowski and her husband Robert of Chicopee and Kathleen A. Brunetti and her husband Dino of Chicopee; his seven grandchildren, Deborah, Sharon, Michael, Matthew, Dina, Nicki and Gino and his five great grandchildren, Jameson, Joey, Lila, Kian and Kina. Beside his parents, Gus was predeceased by his two brothers, Emile and Francis and his sister, Blanche Cohen. There will be a Liturgy of Christian Burial on Friday, March 11 at 11:00 a.m. at St. Rose de Lima Church in Chicopee. Burial will follow the Liturgy in St. Rose de Lima Cemetery in Chicopee. A calling hour will precede the Liturgy from 9:00 a.m. to 10:00 a.m. at the Brunelle Funeral Home, 811 Chicopee St. Chicopee. In lieu of flowers, memorial contributions may be made in Gus�s memory to either the Hospice Life Care 113 Hampden St. Holyoke, MA 01040 or to the Hersman Heart Fund c/o East Springfield Animal Hospital, 525 Page Blvd., Springfield, MA 01104. Please visit www.brunellefuneralhome.com for directions or to share a story with Gus�s family. You are using an outdated web browser that does not support this video. Your browser does not support this video format. You should be able to view it in Chrome, Safari or Internet Explorer. $(document).ready(function(){ if ( false === supports_h264_baseline_video() ) { $("#vdfmtnt").show(); $("#vidplyr1").hide(); } });

The family of August J. Maes created this Life Tributes page to make it easy to share your memories.

Send flowers to the Maes family.