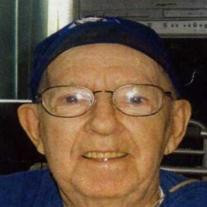 Holyoke, Arthur J. Bourgeault, 85, died Monday, February 21, 2011 at the Soldiers� Home in Holyoke. He was born in Holyoke, December 4, 1925, to the late Viateur and Oliva (Drainville) Bourgeault. Following the death of his mother in 1933, Arthur was sent to live with relatives in St. Cuthbert, Canada and was educated there. He returned to Holyoke as a teenager and later served our country in the US Navy during World War II. He was a faithful member of the Sampson WWII Navy Veterans Association. Arthur worked for the former Diamond National Corporation for many years and retired from the former James River Graphics in 1991. He was a longtime parishioner of the former Nativity of the Blessed Virgin Mary Church in Chicopee where he was a member of the League of the Sacred Heart. In support of his son, Arthur was very active with the Boy Scouts. He served as Assistant Scout Master of Troop 424 and later as an adult leader with Explorer Post 438 both in Chicopee. Arthur loved to �tinker� around his home, enjoyed gardening and spending time with his family. He was predeceased by his loving wife, Martha (Thibault) on March 30, 1986 after 37 years of marriage. Arthur leaves to cherish his memory, his son, Robert Bourgeault and wife Karen of Southwick; his three daughters, Joanne Darcy and husband Frank of Chicopee, Nancy Mainville and husband Matthew of Holyoke, and Sandra Pudim and husband Edward of Scotia, NY. He also leaves 9 beloved grandchildren, Brian Bourgeault, Scott, Sara and Samantha Darcy, Emily and Daniel Mainville, and Edward, Joseph, and Matthew Pudim. Arthur will also be sadly missed by his longtime childhood friend, Bill Lafreniere of Chicopee. He was predeceased by his brother Raymond Bourgeault, his sister, Theresa Bourgeault, and his twin grandsons, Christopher and Timothy Mainville. The family would like to thank the entire staff of the Soldiers� Home, especially 3E, for the wonderful care Arthur received while he was a resident. A funeral procession will form on Friday, February 25, 2011 at 8:15 AM at the Brunelle Funeral Home, 811 Chicopee St. Chicopee. There will be a Liturgy of Christian Burial at 9:30 AM at St. Rose de Lima Church. The burial will follow the Liturgy in St. Rose de Lima Cemetery in Chicopee. Visiting hours will be Thursday, February 24, 2011 from 4 PM to 7 PM at the funeral home. In lieu of flowers, memorial contributions may be made in Arthur�s memory to the Soldiers� Home, 110 Cherry St. Holyoke MA 01040. Please visit www.brunellefuneralhome.com for directions or to share a story with Arthur�s family. $(document).ready(function(){ flowplayer("vidplyr1", "/tools/flowplayer/flowplayer-3.1.2.swf", { clip: { autoPlay: false, onStart: function(clip) { stopBGMusic(); } } }); });

Holyoke, Arthur J. Bourgeault, 85, died Monday, February 21, 2011 at the Soldiers&#65533; Home in Holyoke. He was born in Holyoke, December 4, 1925, to the late Viateur and Oliva (Drainville) Bourgeault. Following the death of his mother in... View Obituary & Service Information

The family of Arthur J. Bourgeault created this Life Tributes page to make it easy to share your memories.

Send flowers to the Bourgeault family.