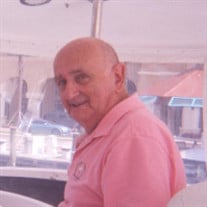 Armand L. Boudreau 1929 � 2010 Zephyrhills, FL � Mr. Armand L. Boudreau, 80, a twenty year Florida resident, and former sixty year Chicopee resident, died on Monday, January 12 at Heritage Park Health and Rehabilitation in Dade City, Florida. He was born in Chicopee on July 20, 1929, a son of the late Napoleon and Angelina (Bonneau) Boudreau. He attended local schools and proudly served in the U.S. Army during the Korean War. He retired after thirty years of service as a machinist from the former American Bosch. He was the former District Commissioner of the Pioneer Valley Council of Boy Scouts and founder and president of the Men�s Club at the former St. Mary of the Assumption Church in Willimansett. He is survived by his beloved wife of fifty three years, Laurette (Bolduc) Boudreau, four sons, James of Florida, Craig and his wife Linda of Chicopee, Keith of Chicopee, and Mark and his companion Cheryl Roberts of Holyoke. He also leaves his sister, Irene Garrity of Rhode Island, grandson, Michael Boudreau, and many nieces and nephews. He was predeceased by eight brothers. Funeral services are on Tuesday, January 19 at 10am from the Brunelle Funeral Home, 811 Chicopee St, in the Willimansett section of Chicopee, followed by a Liturgy of Christian Burial at 11am at St. Anthony of Padua Church. Committal services will follow at the Massachusetts Veterans Memorial Cemetery Chapel, 1390 Main St. Agawam. Calling hours at the funeral home are on Monday, January 18 from 4 � 7pm.

The family of Armand L. Boudreau created this Life Tributes page to make it easy to share your memories.

Send flowers to the Boudreau family.