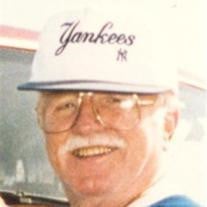 ANTONIO COLUCCI 1920 � 2011 HAMPDEN- Antonio �Tony� Colucci, 90, of Hampden passed away at Wingate of Hampden with his daughter Tina and son Tony by his side. Tony was born in Chicopee, MA on September 5, 1920 a son of the late Constantine and Santa (DiBiase) Colucci. Tony was educated in Chicopee schools and enlisted in the U.S. Navy where he served honorably during WWII as an aviation machinist mate third class. Tony worked as an inspector at Savage Arms for over 52 dedicated years. After semi- retirement, Tony worked for over 12 years at Holyoke Hospital in the Environmental Services Department. He was predeceased by his beloved wife of 53 years, Geraldine �Geri� (White) Colucci on Jan. 14, 2011. Tony is survived by his two adored children; Anthony C. Colucci and his wife Linda of Hampden; Tina C. Martel and her partner Bill Harlow of Whatley. Tony enjoyed his time with family & friends and especially with his grandchildren, Toni Colucci, Dominic Colucci, Robert Martel III and his fianc�e Melissa St. Germain, Amy Kurtz and her husband James, Emily Martel and great grandchildren, Matthew, Ryan, Lydia, Ylena and Jose. He also leaves his brother, Santo Colucci and wife Lena of Florida. Tony will be missed by his many nieces and nephews. Tony and his wife Geri were able to live their dream of living in Vero Beach, Florida from 1989 � 2004 where they worked in semi-retirement and formed many lasting friendships. Tony was a member of the American Legion Post # 353; Am Vets Post# 12 and he enjoyed woodworking, photography and was an avid and dedicated Yankees fan. Tony was also predeceased by his sister and three brothers, Rose Cocchi, Dominic, John and Fred Colucci. Visiting hours will be held on Wednesday from 4-7 PM at Brunelle Funeral Home, 811 Chicopee St., Chicopee, MA 01013. A funeral ceremony will be held on Thursday, May 12, 2011 at 9 AM in the chapel at the Massachusetts Veterans� Memorial Cemetery, 1390 Main St., Agawam, MA 01001. In lieu of flowers, memorial donations in Tony�s name may be made to the Patients� Activity Fund at Wingate of Hampden, 34 Main St., Hampden, MA 01036. Please visit www.brunellefuneralhome.com to share condolences, share stories and photos, visit Tony�s memorial webpage and receive directions

The family of Antonio "Tony" Colucci created this Life Tributes page to make it easy to share your memories.

Send flowers to the Colucci family.