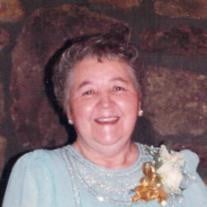 EAST LONGMEADOW- Aline L. Turgeon, 86, passed away on March 22, 2015 in East Longmeadow Skilled Nursing Center. Aline was born on April 17, 1928 to the late Joseph and Amanda (Carrier) Turgeon in Quebec, Canada. She was married to Aristide Turgeon in 1945 and spent 53 loving years together raising their family until his passing in 1998. Aline was a faithful Catholic, and a lifelong member of Immaculate Conception Church in Holyoke. She was a loving woman who was devoted to her faith and her family. Aline is survived by her seven sons, Eddy Turgeon of Chicopee, Aime Turgeon of Southampton, Benoit Turgeon of Springfield, Gaetan Turgeon of VT, Clement Turgeon of FL, Jean Paul Turgeon of AZ, and Ghislain Turgeon of Southampton; six daughters, Raymonde Lambert of CT, Colette Houle of NH, Claire Monty of Granby, MA, Diane Turgeon of CT, Sylvie Turgeon of CT, and Manon Henchey of Holyoke; 23 grandchildren; and 28 great-grandchildren. She is also survived by two sisters, Helen Turgeon and Rhea Brodeur, both of Canada; and several nieces and nephews. Visiting hours for Aline will be Thursday, March 26, 2015 from 5-8PM in Brunelle Funeral Home, 811 Chicopee St, Chicopee, MA. Services will be on Friday, March 27, 2015 beginning at 8:30AM in the funeral home, followed by a Liturgy of Christian Burial at 10AM in Immaculate Conception Church, 54 North Summer St, Holyoke. Burial will be in St. Rose de Lima Cemetery, Section L. In lieu of flowers, donations may be made in Aline�s memory to Shriner�s Children�s Hospital, Donation Dept., 516 Carew St, Springfield, MA 01104. For additional information please visit www.brunellefuneralhome.com.

The family of Aline L Turgeon created this Life Tributes page to make it easy to share your memories.

Send flowers to the Turgeon family.